Sir John Kerle Haberfield and “A House through Time”

Sir John Kerle Haberfield and “A House through Time”

We’ve asked Jane Bambury, one of our volunteers to tell us more about Sir John Kerle Haberfield and what inspired her to become a Research Volunteer:

I first became interested in researching my family history about 25 years ago. There was little on line, so involved much painstaking research for even the basics. However it is now a major hobby, with people of all ages getting involved. I joined the Bristol & Avon Family History Society with my husband Alan, and later volunteered to help in the B&AFHS research Room. There I met Dave Napier, who introduced us to Arnos Vale where he was a ‘Friend’ and tour guide. We both decided we too would like to become volunteers. Alan is now a tour guide, and I help to write the material for the tours. We both are involved with researching the lives of those buried at Arnos Vale.

One enjoyable aspect of research is looking at very old documents at the Bristol Archives, but not at the moment of course, in the current crisis. This makes us very envious while watching programmes based around the subject, where the presenters invariably visit some archive or other. One such programme is David Olusoga’s series of “A House through Time”, which traces the lives of various inhabitants up to the present day.

David was brought up in Nottingham, attended university in Liverpool and now lives in Bristol. Having based his first two series on a house in these cities, it was no surprise that Bristol would be next. The house chosen was no. 10 Guinea Street an early 18th century building in Redcliffe. Quite a few local organisations were ‘let in’ on the secret location last year. The production team contacted several local history societies, including B&AFHS, asking for help about the construction date of the adjacent modern flats on Redcliffe Hill. Arnos Vale was also contacted to discuss the possibility of filming in the grounds, although Greenbank was finally chosen.

During the programme, we see David studying some of the precious documents held by Bristol Archives. These situations cause a few headaches for the archive team. Jo Vietzi, former senior archivist, has written a blog on the trials and tribulations of looking after the documents and you can read more here

I had a look at the synopsis of this week’s episode and was interested to see that one of the stories features Sir John Kerle Haberfield during the tumultuous times of the Bristol Riots and the Chartist Movement. Sir John is buried in a Vault in the Crypt beneath our beautiful Anglican Chapel. 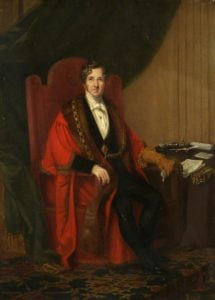 He was baptised at Stoke Damerel, in Devon on 27th Nov 1785, the son of Andrew and Mary Haberfield. The family came to Bristol, and had arrived in Guinea Street by 1804. In 1802 the young John was articled as a clerk for five years to Thomas Jarman of Bristol, a solicitor in His Majesty’s High Court of Chancery. He went on to run a successful legal practice, and married Sarah Dupont, the daughter of one of his wealthy clients. He was also seven times Governor of the Poor, and six times Mayor of Bristol. He became chief magistrate, but declined the salary. Much to the delight of the Bristol rate payers!

With all that is now online, the relatively easy part of researching family history is finding members of your families’ name and dates back to around 1840. The part which requires more dedicated research is finding extra bits from the diverse and huge range of documents, books, and letters lurking in archives and private collections. Scouring the newspapers of the day is helpful too, and the rewards are often great.

On Dave Napier’s website on the subject of Bristol’s Mayors and Lord Mayors is the following snippet about Sir John taken from Bristol Worthies by A B Freeman 1907:-

“It was reported that he was a convivial man who enjoyed presiding over banquets, dinners and festivities – which often came his way as Mayor (‘Chief Magistrate’) and his ‘showy equipage with postillion, in the old style, was familiar with most inhabitants’. On one occasion, when he was sitting on the Bench, a question arose about the water provided in the courtroom and a sample was handed up for the opinion of magistrates, but Sir John declined, saying he “had not tasted water for 30 years and did not feel qualified to pass his judgement upon it.”

He was fond of generous liquor

On the same theme, the “Merthyr Telegraph, and General Advertiser for the Iron Districts of South Wales 17th August 1877” reported the following anecdote:-

“Sir John Kerle Haberfield, six times Mayor of Bristol, was very fond of generous liquor. His Worship did not believe in one law for the rich and another for the poor; and, as the active and intelligent officers of the constabulary never ‘ran him in,’ he was determined that the impartiality of the law should not be prejudiced to his advantage. The morning after a ‘spree’ the following monologue was regularly rehearsed on the Bristol bench, the speaker being his Worship the Mayor: – ‘Sir John, you were drunk last night?’ ‘Yes, your worship, I was.’ ‘Sir John, you are fined five shillings.’ And the money was at once paid by the penitent reveler into the poor-box, which in this way received many a five-shilling-piece (Around £200 today)”.”

We look forward to welcoming you back

This second anecdote features in our “Murder, Mystery and Mayhem” tours, which along with other events have been postponed. The Arnos Vale team are working hard to work out how we can safely begin to resume activities and events. Please keep an eye on Twitter, Facebook and the website. We hope that we will soon be able to welcome you back to visit this wonderful cemetery, and enjoy our tours once more.

The plaque on the wall in the Anglican Chapel is faded and hard to read, however we believe it says:

and was seven times Governor of the Corporation of the Poor

the generous hospitality and bountiful charity which distinguished his life will

to perpetuate his worth and their loss

in the place where his remains are interred

Also in remembrance of Sarah widow of the above

who died at her residence 41 Royal York Crescent Clifton

We need your help

As a result of the COVID-19 pandemic the team at Arnos Vale Cemetery has had to suspend their events and close the buildings, making it difficult to generate the funds they need to sustain themselves. They urgently need donations to ensure that they can continue to look after the site – and resume a full range of activities when it is safe to do so.

In the meantime please enjoy listening to the dawn chorus or download an Arnos Vale colouring in sheet, designed by Do It Later Illustration

You can go to the support us page to make a donation. Any amount, no matter how small, will make a difference.
Thank you x